Tilemaps in games help save resources by reusing a limited number of tiles, often just to the edge of visibility on screen. My first creation of the FTilemap class didn’t include this important functionality, but I’ve corrected that now.

You can still render the entire FTilemap by making skipZero = TRUE, and in some cases that may actually save overhead. FTmxMap will now check for skipZero layer property, and set the FTilemap appropriately (it is FALSE by default). Be sure to pass a clipNode to determine where the centerpoint is (usually this will be your FCamObject).

FParallaxContainer is a new class I added to the FutileAdditionalClasses repo at GitHub. The class is for adding layers to your Futile game that move at a different speed than the camera. You can use this class to create the illusion of depth with slower layers in the background, and faster layers in the foreground. The class extends FContainer, so you can add any FNode content you like to it.

Fill the container with objects, most likely an FTilemap, then set the size. If the FParallaxContainer size is less than the screen size, it will always position itself centered with the FCamObject. When the size is larger than the screen, but less than the cam’s worldBounds, it moves slower than the camera. The example below shows this, with the camera in red, FParallaxContainer in blue, and the worldBounds in green. Notice how the left side matches up when the camera has hit the left side of the worldBounds, and the right side matches up when the camera has reached the right. 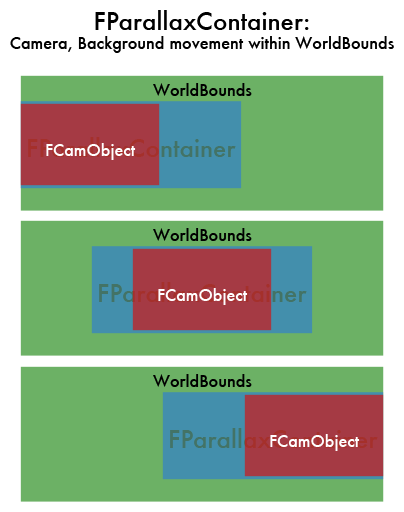 You can also limit the movement to just one axis by making the x (width) or y (height) smaller than or equal to the screen size. Objects within the FParallaxContainer can be placed outside of the size you set.